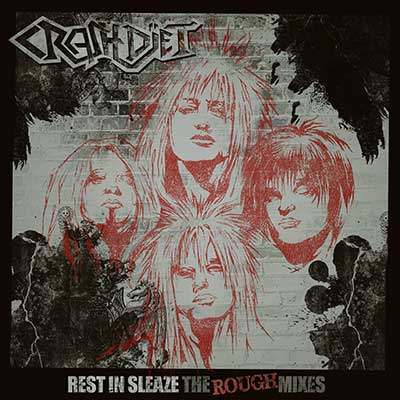 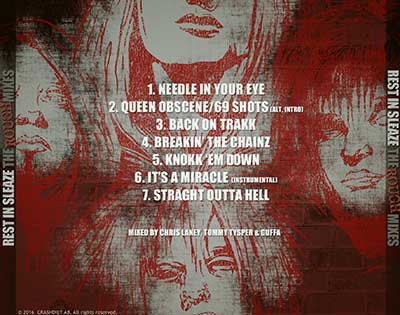 This little guy was finally released earlier today for everybody who pledged for it during our recent Indie-Go-Go campaign.

Let me know your thoughts on this one

Anyway, the compilation took me back to the first time I heard R.I.S., even if these mixes taste like different - but interesting - flavors.
For now, my favorite seems to be Knokk 'Em Down. I can't explain why, but it seems to have a sort of "punky" vibe that I can't feel with the official song. Might this be caused by the extra reverb on the verses? Haha, I really don't know.

I probably have to spend more listens with my headphones on, but overall I'm really impressed.

Less More
6 years 11 months ago #163460 by Wasted Generation
Replied by Wasted Generation on topic The R.I.S. Rough Mixes
In all honesty, I had forgot that I bought this. So far these are an interesting insight into the original ideas for each song! Awesome job, IMO!!

Less More
6 years 11 months ago #163461 by GlamourSwinexXx
Replied by GlamourSwinexXx on topic The R.I.S. Rough Mixes
These are very interesting to hear! I've heard demos here and there over the years and to see the songs change and grow over time is a very surreal experience. This is just one more step in their creation unheard by us fans I suppose!

-I'm guessing all of Dave's vocals are the final cuts as they sound almost identical to the album? Hearing him so clean and 'on top' of the instrumentation adds a whole new layer of freshness to the songs and respect for that man!
-Sooo glad Back on Trakk was included <3 I really dig the bass guitar higher in the mix and a few subtle guitar alterations are cool. Always LOVED the acoustic guitar on this song and it's just so damn neat to hear it a bit differently mixed!
-Queen Obscene has gone through so many changes, don't think I've heard that intro guitar part before. Speaking of guitar parts, I never actually noticed those few notes right before the choruses ("I swallowed..") on Miracle... just made me love the song even more!
-Breakin' the Chainz sounds heavier, I'm not sure why but it just sounds dirtier and grittier. I dig it.
-I've always said Peter and Martin's backup vocals are some of the best in the business and just hearing them more prominent in some spots is sick. I can't say enough good things about this album xD
-I think the handclappy-sounding drum things fit a little better on Needle than on Knokk 'Em Down, but they're overused. That's really the only detracting thing I can think of. Gonna have to listen with my good headphones yet so I may add more to this post when I do

Less More
6 years 11 months ago #163464 by peterlondon
Replied by peterlondon on topic The R.I.S. Rough Mixes
So thrilled to read all the positive feedback

1.) Are these the final mixes of the songs right before mastering? eg. Were those the takes that we hear on RIS?

2.) I always found it odd that RIS sounded quite patchy in terms of production. Most notably the drums (they sound different at almost every song). There is also a big difference between the songs produced by Chris Laney and Anders Ringman (Knokk 'Em Down, Needle In Your Eye, Tikket, Straight Outta Hell, Back On Trakk) as opposed to Grizzly and Tysper (Riot In Everyone,Queen Obscene, Breakin' The Chainz, Out Of Line, It's A Miracle). Let me just say that I prefer Laney's productions as they sound crisper and more modern. But as I said the most confusing thing is the recording of the Drums. According to the liner notes we have:

As can be seen, the BoBs recordings are also the ones that Chris Laney and Anders Ringman produced and they sound the most consistent. How come the other songs were scattered about in terms of where to record them and with whom?

3.) Amazing to hear all the details in percussion elements and other effects that got lost during the master.

4.) Do you have more instrumentals like Miracle you could publish? It would help immensely in figuring out what the guitars doing

"So you ask me how it feels to be a stick in the wheel
I tell you honey it feels alright
to be another clog in the wrecking machine
wouldn't even cross my mind"
Last edit: 6 years 9 months ago by fizzy.

Less More
6 years 9 months ago #163481 by friedoctopus
Replied by friedoctopus on topic The R.I.S. Rough Mixes
I don't think I have anything original to add, so instead of repeating what everyone has already said I'll just reiterate one point: I absolutely LOVE the instrumental version of It's A Miracle. It's probably my favorite song on the album to begin with, and I'm a sucker for instrumentals in general. They give a completely different perspective and connect on a deeper level to me. I've found myself just listening to this track over and over.
"Though strange lay the waters from which they emerged, they glanced upon the world as their own; yet deep in their hearts they knew all the time that this was not really their home." -Watain, 'They Rode On,' 2013

Less More
6 years 9 months ago #163497 by mrs v. viper
Replied by mrs v. viper on topic The R.I.S. Rough Mixes
fizzy, the nerd is strong in this one haha. I get the curiosity though.
☽ O ☾ "Graphic design will save the world right after rock and roll does." - David Carson
In case you need a designer/illustrator:: my Instagram
CRASHDÏET Streetteam germany

mrs v. viper wrote: fizzy, the nerd is strong in this one haha.


Always when it comes to RIS